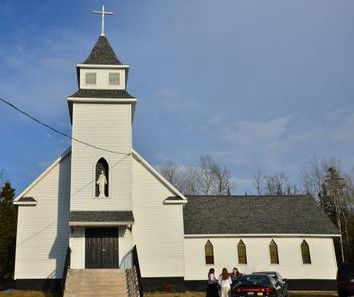 Sacred Heart Church - Sugar Island
Bishop Frederic Baraga visited Catholics living on Sugar Island often in the mid-1800s. Of the four churches that had been erected on the island, Sacred Heart is the only one at which regular services are still offered. A priest from Sault Ste. Marie offers Mass and a group of parishioners takes care of the business of the parish and maintains the building.
Founding: Located east of Sault Ste. Marie in the St. Marys River, Sugar Island was visited by Bishop Frederic Baraga between 1854 and 1864. The four churches erected on the island were: Holy Angels at Payment--regular services were offered from 1857 to 1953; St. Joseph at Ishkonigan near Gem Island--operated from 1861 to 1930; St. Theresa at Six Mile Road-founded in 1893, moved to Wilwalk in 1943, renamed St. John and St. Anne in 1950 and closed in 1960; and Sacred Heart at Baie de Wasai (now referred to only as Sugar Island).
Parish Life: Sacred Heart Mission was founded in 1911 by Jesuit missionary Father William Gagnieur. Before construction of the church, Mass was offered in a private home, the log schoolhouse or Thibert’s store. The church was blessed Sept. 8, 1928. Mass continues to be offered every weekend at Sacred Heart. Since 1982 one Mass also has been offered at the Holy Angels Church, usually in the summertime. That church is a Michigan Historic Site.
Father Joseph Lawless, SJ, began assisting with the Native American missions of the diocese in 1946. Under Father Lawless’ leadership a basement hall was dug under the Sacred Heart church. For decades a ladies’ guild helped raise money for necessary improvements to the church. A new altar was erected in 1969. In the early 1970s the church acquired additional property. Renovations in the mid-1970s included the construction of a reconciliation room, roof replacement and interior painting. In 2003 a pipe organ was dedicated.
A core group of parishioners maintains the church and conducts the regular business of the mission. The pastor from St. Mary Parish in Sault Ste. Marie travels to the island by ferry for the weekend Mass. Many summer tourists join the 40 families of the parish for worship. An annual picnic had previously been a parish tradition.
Jesuit missionaries served the people of Sacred Heart Mission for most of the 20th century. In honor of his 40 years of generosity, commitment and outstanding contributions to the people of the region, Father Lawless was named the 1990 Sugar Island Citizen of the year.